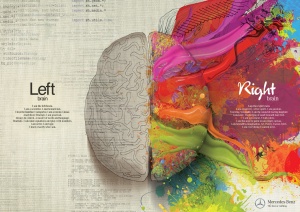 Therein lies the fallacy of the “Left Brain – Right Brain” dichotomy that has developed over time and frozen into over minds. For a long time, I have followed the same understanding of the Creativity v/s Rationalism.

We’ve gone through more than 200 years of evolution through the economies driven by industrialization and operations, to lead ourselves to train our minds more left-brain-wise than the other, for progress in terms of increased production. This has also led to the stronger reinforcement of the dichotomy-based theory behind the operations of the brain (as brain got more and more Left Brain oriented in practice, asking for rationale).

Lain McGilchrist has brilliantly covered this in his book “The Master and His Emissary”. Here’s an awesome RSA Animate illustration of one of his speeches on the subject.

Implication on Workforce and Business?

Through the Industrial Economy, we focused on building the Left-Brain trained work force. This workforce was oriented to bring order and harmony, and hence to bring efficiency to processes and systems. So far so good, but we took this further into Knowledge Economy. Success of most Tech firms would tell us otherwise, but this success is not sustainable in long term due to the inherent contradictions of the requirements of Knowledge Economy with the way our organizations are trained and conceived.

Few of the simple/basic challenges that we see today –

This contradiction seems to be everywhere.

Prima facie, None of this seems “contradictory”. The problem is when the left-brain does the strategy & planning – that requires a broader context and intuitive input too – in the narrowly, scientifically modeled context. This is especially problematic when applied to work items that involve more Right Brain activity (Broader Context, Intuitive Thinking) than the Left Brain.

There’s going to be a change in the World Order of Business & Workforce.

And as I think about it this way, one of my observations for Business Strategy is that we see more and more Black Swan Successes in business. They seem logical and comprehensible in “retrospect”, however, not definable at the time of their formulation. Google, Twitter, Facebook, Pinterest, Instagram are just tip of the iceberg with plenty of such examples.

These are driven by Right Brain Strategy built on Intuition and Broader context of ecosystem, than the rational Left Brain driven Business Plan / Strategy in a narrowly focused environment. And that would explain why these are not rationally foreseen, but only explained in retrospect thus. A Right Brain person may be able to predict such success, but cannot explain or rationalize it either.

Technology has enabled new phenomena – such as Long Tail, Free Business Models, Multi-Sided Business Platforms – resulting in more such Black Swans to appear. And, this seems to be just the beginning of the overturn. In the new World Order, The balance of Left-brain and Right-brain will prevail, in individual success, as well as in Business.

Could it become a Right Brain Driven economy instead? My guess is as hazardous as yours. My best guess would be (biased as a proponent of a balance between the brain hemispheres!) a more balanced play field.

This entry was posted on July 16, 2012, 7:07 pm and is filed under Business, Human Behavior, Innovation, Leadership, Management, Marketing, Technology, Trends. You can follow any responses to this entry through RSS 2.0. You can leave a response, or trackback from your own site.