Let me start with a simple question. What is common among these, as of 2006 (and, for that matter, even as of today)?

All of these are known examples of facilitation based multi-sided business models. These are not just products or businesses; these are platforms, in the true sense of the word. These platforms have, some even in industrial and so called traditional businesses, created value by “facilitating interactions & transactions” among various groups involved. They depend on network effect to kick in, and then thrive big time.

The concept of the two-sided markets is not new. In fact, the newspapers might have been among the first to exploit it, through low-priced subscription subsidized by the sponsors paying for advertisements.

Networking Events and conferences have been a great example of a non-tech two-sided platform, and they are sold on the same direct benefit as well. The sponsors subsidize the participants’ fees, and hence get presumably higher visibility. Participants get to network; sometimes get direct information or sales leads; and pay for it unless in some cases, fully subsidized by the sponsors.

However, these business models, as represented by the examples above, were still very few & far in between until few years back.

The business world, since, has changed. And, drastically so! 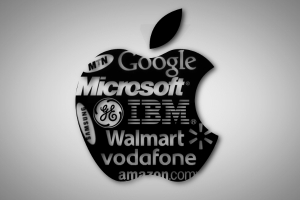 Google and Apple have become the most valuable brands in the world. Amazon, that revolutionized the Books & Publishing market through the e-Commerce strategy, has since transformed itself into a Platform company. Facebook, Twitter, Instagram, and recently Pinterest have become the household names, beyond the tech world. Travel, Hospitality & Commute have become well-integrated platforms driven businesses – driven through online technologies and ground-level operational integration.

How Sony faltered, and How Apple & Google propelled

Let’s take an example of two companies that seem to be very similar on products stack otherwise. Apple and Sony. Sony actually brought upon the concept of music that you could carry, with its revolutionary Walkman. Apple came in very late, with iPod. Sony has had a premium quality tag in computing machines (with Vaio) for a long time, while Apple’s Mac slugged it out in its own creative/designer/geek space. Sony even had the earliest starts with its Reader as long back as in 2006! They even had a great idea of Reader being the platform, and got the leading publications in Japan to take note that time. Sony, a very relevant company even today in tech world with the quality and huge brand image to boot, (interestingly, it has had at least one product in platforms category in Playstation) has fallen to 31-Year lows. They continued selling products in silos on their own standalone benefits. They are a product company, still a great one, but that doesn’t seem to be enough!

On the other hand, Apple had an iPod – as a standalone “take your music with you device”, around 2001-02. With iTunes, it took the first steps into a platform around 2003. However, it has since transformed into a true platform company, with its formidable all-integrated business strategy that brings together computing, entertainment, and business. iTunes is a comprehensive AppStore, and not just a music store. Apple is a multi-dimensional company at its best – it brings multiple beneficiaries together in this multi-facets products business. iOS developers and Applications users. Musicians, music companies and Music lovers. Local or global businesses and their customers and fans. We’ve even started seeing the serious Enterprises making Apple devices the central to their CoIT (Consumerization of IT) and collaboration strategy. iPod, iPhone, iPad, Mac, iCloud – they sell products but they’re a platform! And, in Feb 2012 Apple became the most valuable company in the world!

Google is an obvious name in the multi-sided platforms strategy. They took forward the newspaper ads model and applied it to search beautifully. And now, with the Enterprise businesses as well as their ever-growing list of vehicles – in GMail, Google Apps, Android, Chrome, Maps, Drive, and so on – have established themselves as an formidable Multi-sided platform. At this time, there doesn’t seem to be a limit on what vehicles Google can choose to drive their platform strategy. Microsoft is now fighting it out on its own turf while Google and Apple make inroads into its huge Enterprise foothold. (This also points to another trend that I’m planning to write about – the blurring of lines between Business & Personal Technologies).

This era clearly belongs to the multi-sided Platforms based business. It’s important, however, to not confuse this with the traditional definition of platforms in technology space. The true business platform is the one that is driven by facilitation and network effect, and which actually has multi-sided business model in the sense of heterogeneous set of beneficiaries that are not directly connected to each other. It is also important to note that this disruption has been caused not only by technological evolution, but also the interlinked effect of the other disruptive patterns such as “Long Tail” and “Free”, both terms made popular by the very respectable Chris Anderson. I will touch upon these in the next couple of posts as noted in my cover post on Game-Changer trends.

If you’re in a business – whether technology or not, whether e-commerce or not, whether products or services – don’t ignore this trend. Think about how you can leverage on this model, or be part of this ever-growing multi-cog machine that benefits all its gears. But, if you really think details, it’s not just a marketing gimmick, and it’s not just a tweak in the product. It should become the foundation of how business is conceived, strategized and operationalized.

Or would you think this is a passing trend? At least, I don’t think so!

This entry was posted on May 13, 2012, 7:34 pm and is filed under Business, Innovation, Leadership, Marketing, Technology, Trends. You can follow any responses to this entry through RSS 2.0. You can leave a response, or trackback from your own site.